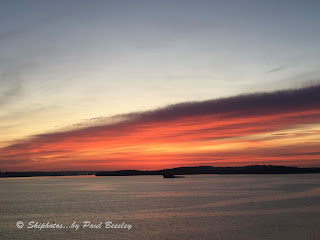 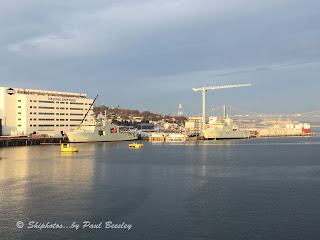 Above:  A couple of the Harry DeWolfe class ships being built for the Royal Canadian Navy.
Arctic Offshore Patrol Ships (AOPS). 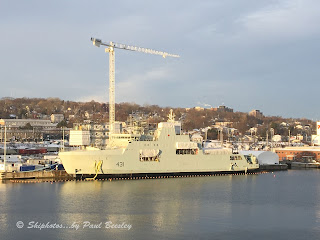 # 431 is the HMCS Margaret Brooke.
Margaret Brooke's heroism in the frigid waters of the Gulf of St. Lawrence is the stuff movies are made of. In the early morning of Oct. 14, 1942, the 27-year-old Royal Canadian Navy officer was aboard the SS Caribou, a ferry traveling between Sydney, N.S., and Port aux Basques, Nfld., when the vessel was hit by a torpedo from the German submarine U-69 in the Cabot Strait off Newfoundland. 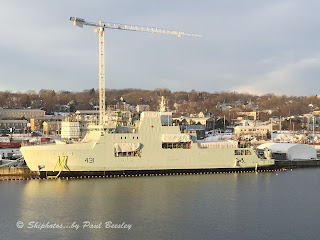 HMCS Grandmere, the minesweeper that had been escorting the ferry, left the survivors to chase the German submarine; 136 of the 237 passengers died, many of them civilians, including children. The Grandmere did return to pick up survivors. 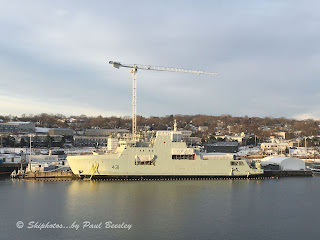 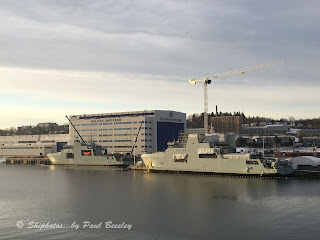 The Battle of the St. Lawrence claimed a total of 340 Allied lives, about half of them members of the Royal Canadian Navy and Merchant Marine. The sinking of the SS Caribou was the single greatest loss of life. Four months after that sinking, the U-boat responsible, U-69, was forced to the surface by depth charges and rammed and sunk by a British destroyer in the North Atlantic. All 43 German sailors aboard perished. 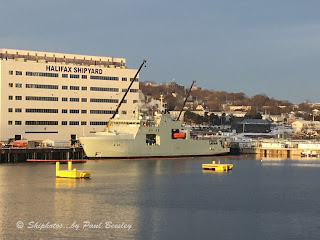 Above & below:
I believe this one will be HMCS Max Bernays.
The Canadian Coast Guard is scheduled to get a couple of these, with modifications.
One item that needs to be changed is the funnels.  As built they appear to completely block the view aft.  This is not conducive to close escort in any type of ice conditions. 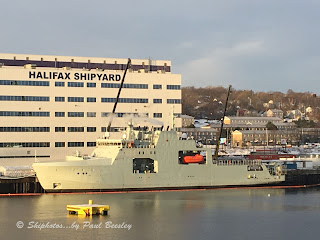 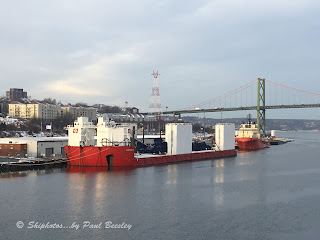 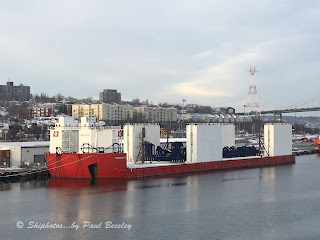 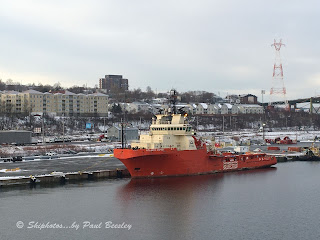 Above & Below:
Atlantic Osprey, offshore supply vessel based in Halifax.
UT 722L.  This design is licensed by Rolls-Royce Marine with licenses for production worldwide. 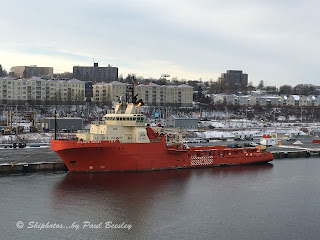 Below:
MV Asterix.  RCN's new supply and replenishment ship.  It is not HMCS because it is owned by Federal Fleet Services in Ottawa and is part of Operation Resolve.  She is a civilian ship and owned privately, hence the MV. 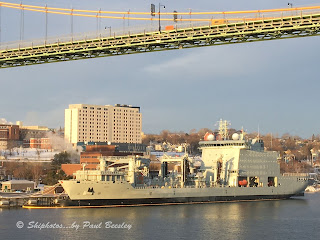 Asterix will be leased to the RCN for ten years, operating with a mixed crew.  Civilian sailors will operate the ship while RCN personnel will be assigned to the ship for naval operations.  The air detachment for the Cyclone or Chinook helicopters with be RCAF personnel.

Below:  A couple Kingston Class coastal defense ships at the dock at the RCN base in Halifax.
There are 12 of these ships.  They were built in the mid to late 90s.  They're crewed by a combination of Naval Reserve and Regular Force personnel.

Their main missions are counter-narcotics, coastal surveillance, sovereignty patrol, route survey and training.  They were designed as minesweepers. 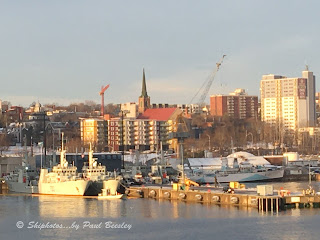 The hull  is a longitudinally framed structure and was designed to minimize steel weight.  The construction involved initial production of partially outfitted steel modules which were made into sub-assemblies and then integrated into the ship.  The decks were assembled upside down with pre-outfitting of the underside of the deck prior to installation on the ship.